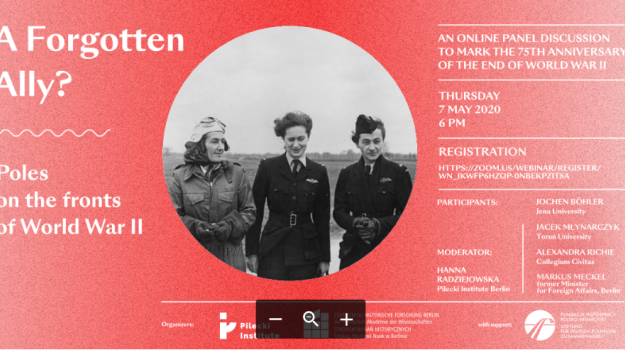 Professor Grzegorz Berendt's comment on the conference "A Forgotten Ally? Poles on the front of II World War"

A comment on the discussion was asked professor Grzegorz Berendt. We encourage you to read the summary of the event by the deputy director of the Museum of the Second World War.

About "A Forgotten Ally? Poles on the front of II World War"

The Pilecki-Institute, the Centre for Historical Research and the Foundation for German-Polish Cooperation present: A Forgotten Ally? Poles on the front of II World War - an online panel discussion to mark the 75th anniversary of the end of World War II

Why is the Polish contribution to the Allied victory in World War II not sufficiently present in Western cultures of memory? Polish soldiers were barred from taking part in the big victory parade in London after the war. Yet they contributed to the victory of the Allies: not only in the Battle of Britain, at Tobruk, Monte Cassino, Berlin and in the liberation of Holland and Belgium. Panelists will discuss the presence of Poles in various arenas of war and Poland's role as a political entity – the government in exile in London, the Polish Armed Forces in the West and East, the Underground State and Home Army in occupied Poland – as well as the European perception of this somewhat forgotten ally.