The Museum of the Second World War was established in Gdańsk in Władysław Bartoszewski Square, on the Motława River, close to the historic city center. The museum is located in an architecturally significant space, and it is also a memorial, as it is located 200 meters from the historic Polish Post Office building in Gdańsk and just seven kilometers by water from the site of the former Polish Military Transit Depot on the Westerplatte Peninsula, attacked in September 1939.

The Museum area, occupying 17,070 square metres, borders from the west  the Radunia Canal and from the south opens up onto a panorama of the Motława river. Currently, this area is on the outskirts of old Gdańsk, but soon it will be the center of a modern district presently under construction situated in the post-shipyard area.

The area on which the Museum of the Second World War stands is bordered by:

In the Middle Ages, this area was part of the defensive structures belonging to a fortress erected by the Teutonic Knights. The fortifications were built on the site of a former stronghold belonging to a prince, and the area was transformed into the forefront of the defensive structures, separated from the mainland and the fortress itself by moats. In the mid-15th century, this area was as yet only a modest seat of the Bucketmakers Guild. On the other side of the moat there was the so-called Brabant area. In the mid-17th century, the area underwent a significant transformation. A new part of the final section of the Radunia Canal was dug, which from then on flowed into the Motława canal, not the Vistula river. As a result, this area known as Wiadrownia was limited to a small, triangular island, the shape of which influenced the urban geography of this area of the city. The roadway system consisted of the following streets: Wiadrownia, Stara Stocznia, Piekary, Wielka, Mała, and Kowale.

The original buildings on the site of the Museum, although made of brick, were poor in construction, residential housing. There was also a construction site and a timber yard on the headland between Stara Stocznia Street and the Radunia Canal. Between 1942 and 1944, a light air-raid shelter was erected in this area, which still exists today. After the centre of the city was destroyed in 1945, the area was significantly transformed. Out of the existing street layout, only Stara Stocznia has survived. The rest of the streets were liquidated after a bus depot and several squares were created.

The Museum building has an overall area of 34,111 square meters. An area of over 5,000 square meters has been allocated to the main exhibition. This is designed to present the Second World War in a contemporary way, both from the perspective of the greater political events of that time but, above all, from the experience of ordinary people. 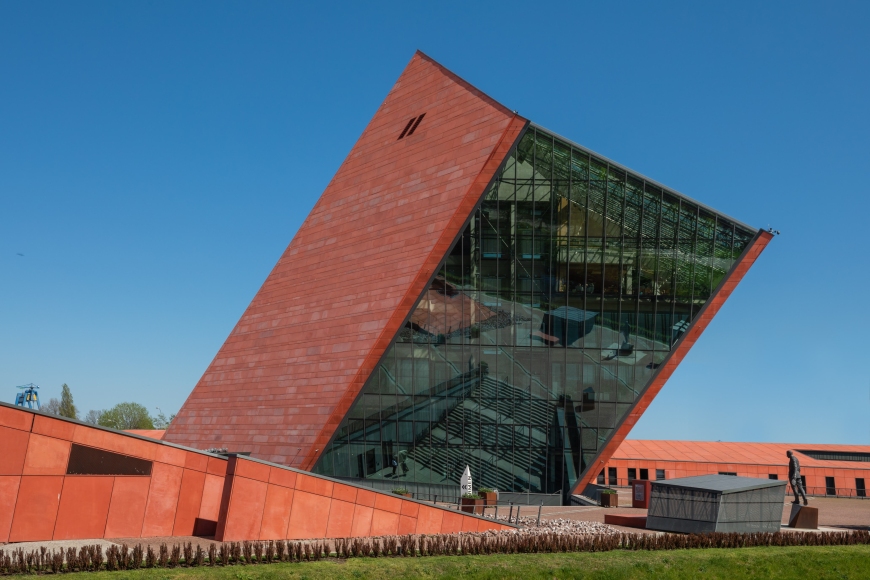 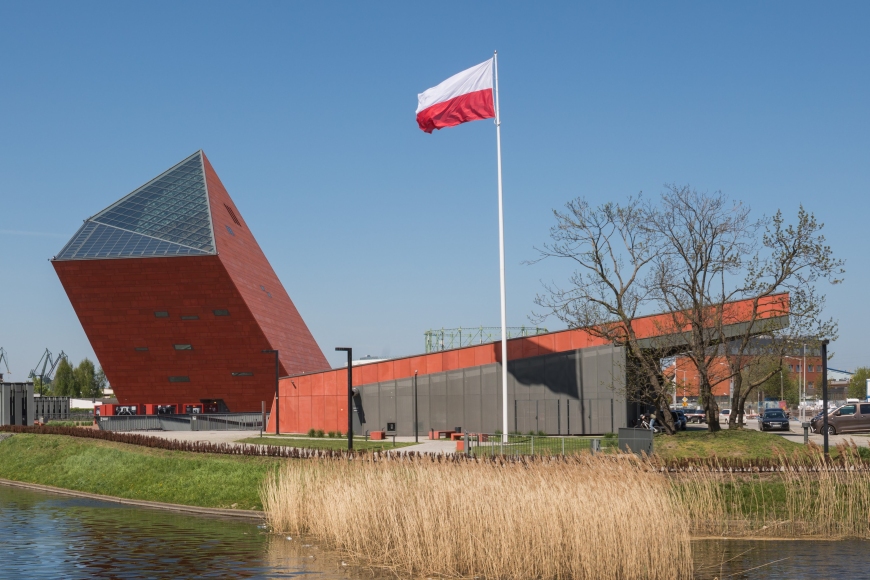 ARCHITECTURE AS A SYMBOL

The building of the Museum headquarters has been highly praised by architects throughout the international community A competition jury once described this project as a "new symbol of Gdańsk", "a new icon", and "a sculpture project".

Daniel Libeskind, one of the most respected architects and designer of, among other projects The Jewish Museum in Berlin justified the choice of the project with the following words:

Using the language of architecture, the chosen project tells us about the tragedy of the past, as well as the vitality of the present, while showing the horizon of the future. The dynamically rising forms are symbolic of the museum located below it. The building creates a wide, spectacular window into the city's past and into its future. With references to Gdańsk’s iconic panorama of shipyard cranes and church towers, the building combines the traditional areas of the city, their scales, materials and colors, with a museum made for the 21st century .

The creators of the project from the architectural studio "Kwadrat" refer to this building as a silent project, meant to evoke strong emotions and deep reflection from visitors. The "Kwadrat" studio is based in Gdynia and has been active since 1989. In the wake of the political and economic changes which took place in 1989, the team leaders Jerzy Kaczorowski, Jacek Droszcz and Adam Drohomirecki decided to set up one of the first private design and architecture companies, whose name translates into English as "Square". The company's position as an industry leader was established after it the team won several major awards in architectural and urban planning competitions. The studio carries out design activities in the fields of both residential and public utility architecture.

The symbolic physical expressions of the links between the past - i.e. the war - with the present and the future, is the spatial division of the Museum into three zones: the past, hidden in the basement of the building, the present, which appears in the open square around the Museum, and the future, which is expressed by the dominant  vantage point of the Musem

The architectural design is a bold vision of international ranking. This design is unlike and does not mimic any of the many museums I have seen in the world. It is special. But it is not only the matter of the theme that is very strong and deeply rooted in Poland, and above all in Gdańsk. We are looking at a world-class solution, a solution worthy of the 21st century, intended for generations that have not yet been born.

The ceremonial laying of the cornerstone for the foundations of the Museum took place on September 1st, 2012. The cornerstone was a piece of cobblestone found during archaeological excavations, which used to be part of a street in the Wiadrownia district, located on the site of the Museum before the war. The cobble stone, with a signed document marking the act of laying it, is housed in a special stone pedestal.