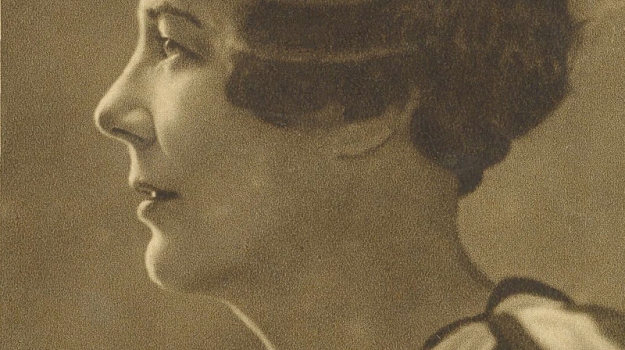 As part of the #M2WSonline project, we publish an article  by Dr. Tomasz Szturo, Deputy Director of the Museum of the Second World War in Gdańsk. This time the article is devoted to Zofia Kossak – co-founder of the Żegota Council to Aid Jews.

It is rather unusual that no feature film has been  made based on Zofia Kossak's novel. It is even more puzzling altogether  that no film about Zofia Kossak has been made. And yet, she was an exceptional character, colourful and profound like her prose. Her life was, at the same time,  rich, intense, harrowing. Zofia Kossak experienced multitude, countlesss emotions – love, splendour, servile tributes, but also envy, liabels and a whole load of suffering. She witnessed  most terrible disasters of the 20th century: the Bolshevik rebellion and World War II. She lived through the death of her husband and sons, she was subjected to brutal interrogation, she had several  brushes with death. But she always adopted an uncompromising attitude – that of  utter objection to evil.

Zofia Kossak was born in August 1889 in Kośmin in the Lublin region. She came from an artistic family, deeply rooted in Polish culture. Her grandfather was the famous painter Juliusz Kossak, and her cousins were Magdalena Samozwaniec and Maria Pawlikowska-Jasnorzewska. However, as adult writers, Zofia and her cousins did not take to each other much owing to the differences in sensitivity and literary tempers. Zofia grew up in patriotic gentry tradition, indulging in art and history. As a teenage girl she worked as a teacher. Later she studied painting (at the Warsaw Academy of Fine Arts) and drawing (at the École des Beaux Arts in Geneva). In 1915 she married Stefan Szczucki, with whom she settled in Volhynia. There, in 1917, she experienced the bestialities unleashed by the Bolshevik rebellion, which would later become the basis for her literary debut, Pożoga (The Blaze 1922). The novel, transalated into several languages including Japanese,  turned out to be a great success. Expecting further brutalization, the Szczucki family moved to Lviv, where Stefan died in 1921. After her husband's death, Zofia settled in her parents' estate in Cieszyn, in Silesia. There she met Zygmunt Szatkowski, a major in the Polish army, who had been secretly in love with her for years. She married him in 1925.

Even with her debut novel, Zofia Kossak knew how to capture her readers. Her novels were widely popular, although they often caused unrest with shrewd historical authenticity and uncompromising, harsh judgement. Their author was widely revered, based on her literary laurels. Kossak also took active part in  public debate, and to this day her articles are often denounced as anti-Semitic. Such accusations, however, placed against the writer's attitude towards the Holocaust, are unseemly, to say the least. Indeed, Zofia Kossak wrote critically about Polish-Jewish relations, and she discussed multiple problems and areas of discord. While in those discussions she adopted  the Polish raison d'Etat, yet labelling her writings as  anti-Semitic is ungrounded and it obscures historical truth. Another thing is that the Yad Vashem Institute in Jerusalem honored her posthumously (in 1982) with "Righteous Among the Nations" medal.

In the first months of the occupation, Zofia Kossak's books were placed on the list of "dangerous and undesirable anti-German literature", announced by the General Propaganda Division of the General Government. She herself was being tracked by the Gestapo. Despite those adverse circumstances, Zofia Kossak remained active. She co-founded the "Front for the Revival of Poland", published in an underground press, and devoted herself to helping Jews by organizing their escapes from the ghetto. In August 1942, she published a famous Protest, an act of unprecedented courage. She was the first in the whole of occupied Europe to speak out against the Holocaust and call for solidarity with the victims: "Whoever remains silent in the face of murder becomes an accomplice of the murderer. He who does not condemn – he accepts".

In the autumn of the same year, together with Wanda Krahelska, she founded the "Temporary Committee to Help Jews", which soon became the Council to Aid Jews, the famous "Żegota". The organization's code name was adopted from Part III of Adam Mickiewicz's Dziady (from Konrad Żegota). Almost a year later, as a result of an unfortunate turn of events, Zofia Kossak was arrested by the Gestapo. The gendarmes patrolling the streets apprehended her on account of her Jewish appearance (the effect of emaciation and fatigue), and having checked her papers, they discovered that the Kennkarte Kossak was using was counterfeit. She was imprisoned in the Pawiak prison, subjected to severe torture, but she did not give anyone away, nor did she reveal her true identity. As Zofia Śliwińska, she was sent to Auschwitz, where her son had died six months earlier. She will later describe her concentration camp ordeal in her book From the Abyss. While in the camp, she was infected with typhoid and was on the brink of death, but her  salvation borders on the miraculous. When the Germans discovered her true identity they decided to cure her in order to send her back to the Pawiak prison, where she was to undergo a thorough interrogation and be executed. Then she was saved by means of a bribe from the Polish Government Delegation to the country. After the war, under the Stalinist rule, she remained in hiding. She was tracked down by Jakub Berman, one of the leaders of the new regime, a notorious and sinister figure. And here is where the next miracle in Kossak's life happened. Berman offered help. He let her go to England to pay off the debt for saving his relatives from the Holocaust.

Kossak was received badly in exile. The writer was slandered, accused of cooperating with the Stalinist regime (she was supposed to be Bierut's personal assistant), ostracised. The authorities of the People's Republic of Poland deprived her of her Polish citizenship, and her books were subjected to heavy censorship. Meanwhile, in the West, Kossak's work was largely popular, and her novel Without  Weapons was awarded The Book of the Month prize in the USA. But the writer did not rest on her laurels. In 1947, together with her husband, she settled on a farm in Cornwall, where for the following 10 years she mixed her literary work with cow and sheep breeding. It was a difficult and exhausting period in her life. After the Stalinist thaw, the communist authorities revoked the restrictions imposed on Kossak. The writer returned to Poland and settled in her hometown Górki Wielkie in Cieszyn, Silesia. In 1966, she was even awarded a prize by the ruling authority which, however, she refused to accept in protest against the restrictions imposed on  celebrations of  the Millennium of Baptism of Poland.

Zofia Kossak was a prolific and appreciated writer. She penned nearly 50 books, mainly lofty historical novels, and each of the books is worthy, wise, and literarily refined. Kossak was compared with Sienkiewicz and Kraszewski, which seems to be only partly true. Indeed, when compared to Sienkiewicz, Kossak prose has the same epic momentum, the same narrative zest, and absolutely magnificent  historical perspective. But Kraszewski's bulky tomes did not stand the test of time – today they seem archaic and graceless, while Kossak's novels permeate tradition and novelty. Their narrative  structures are modern and dynamic,  the worlds depicted – lively, the characters – formidable. But Zofia Kossak's novels are not just impressive historical frescoes – they also paint insightful psychological portraits, offer philosophical perspective and, above all, encourage  theological insight. As readers, we are confronted with a universal, profound picture of the world, history, and man. Many of these novels caused animosity, shocked  with their uncompromising and objective narrative , and revealed the truth, often painful and sinister. For Kossak stopped at nothing to reveal evil, portraying the horrors and bestiality imposed upon history by man. This is perfectly laid out in Crusaders, where Kossak mingles the noblest spiritual motives and sacrifice with rabid fanaticism and politics. In the Leprous King, holiness and sacrifice stand alongside corruption and lying; In Without Weapons, faith becomes a feeding ground for disgusting greed. But there, over the abyss of bestiality, dignity prevails – turning to God, feeling God's breath.

As a deeply religious person, Zofia Kossak knew how to write about the history of the Church and Christianity without idealistic simplifications, exposing the contemptible and the repugnant. It was in Christianity that she saw the guardian of our integrity and metaphysical order. But Kossak was also receptive to folk imagination and beliefs. Hence the presence in her prose of phantoms, eerie creatures and pre-Christian deities, with the world of spirits harmoniously blending with the world of man.

Zofia Kossak passed away in 1968, and when she was going, she had the right to speak with the words from her novel The Covenant : "I will die, yet I will live... I will die, but my eyes will see my Lord...", for "can mortal  come from the Immortal?".