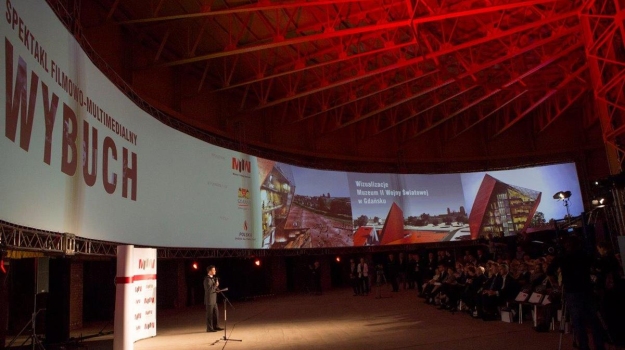 On 1 September, the Museum featured a unique film and multimedia performance “The Explosion” by Andrzej Wajda in commemoration of the 75th anniversary of the outbreak of the Second World War. The performance was presented on a large-format screen 80 metres wide and 5 metres high, arranged within the body of a former gasworks on the premises of the Polish Gas Company in close vicinity of the Museum of the Second World War’s future home.

“We presented archival photos dating back to the Second World War that had not been shown before which would be included in the main exhibition in the Museum. It is not only a presentation. The performance is a work of art and its creator is Andrzej Wajda,” said Director of the Museum Prof. Paweł Machcewicz. “It talks about history but simultaneously it is a showpiece of the Museum which is being built in Gdańsk.”

“The Explosion” combines unique archival material, photos, films and scenes from Andrzej Wajda’s films Lotna and Katyń with computer animation, video mapping and other editing techniques, thanks to which images are brought to life on a large-format screen.

Gdańsk Mayor Paweł Adamowicz underlined that buildings such as the historical Polish Post Office, the recently opened European Solidarity Centre and the Museum of the Second World War that is being under construction create a topography of memory and they are important places in the history of Gdańsk, Poland and Europe.

A guest of honour during the premiere was Andrzej Wajda who explained that he had been thinking about creating a work of art resembling the shape of the Racławice Panorama cycloramic painting since 1939 when he had seen it for the first time in Lwów.

“I look at my work with amazement and great approval. It makes a real impression on me. These images that are disappearing one after another,” said Andrzej Wajda. He concluded his speech with a thought, “People ask: Do we need to go back to the past? I think that a society without a past is just a crowd. And we don’t want to be a crowd. We need to know our past in order to know who we are and where we are heading.”