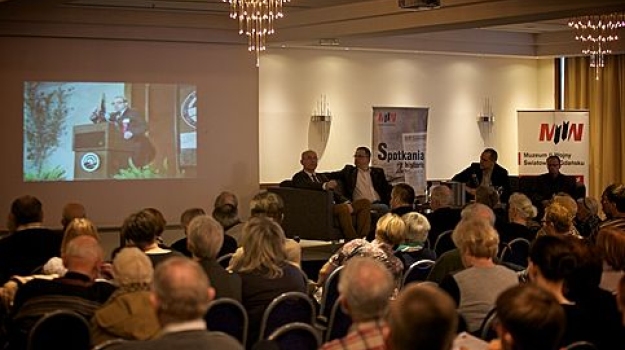 ‘Meetings with history’. Discussion of Raul Hilberg’s The Destruction of the European Jews

On 13 March 2014, a discussion in the ‘Meetings with history’ series addressed the Polish edition of Raul Hilberg’s The Destruction of the European Jews. This three-volume work came out in Poland for the first time in 2014.

Taking part in the discussion were Dr hab. Grzegorz Berendt of the Institute of National Remembrance in Gdańsk, a lecturer at the University of Gdańsk and a member of the council of the Jewish Historical Institute; Dr hab. Dariusz Libionka of the State Museum at Majdanek and the Polish Center for Holocaust Research; Jerzy Giebułtowski, its translator into Polish; and, as moderator, Dr hab. Rafał Wnuk, head of the Research Department of the Museum of the Second World War.

The event featured a screening of archival footage of Raul Hilberg talking about his book’s theses and research. The speakers discussed the long years of work on the Polish edition, and its role in international Holocaust historiography. They also evaluated its principal theses, its terminology and the controversies it still provokes more than 50 years after it was originally published in the United States. Questions from the public followed.

Raul Hilberg (born 1926 in Vienna, died 2007 in Williston, Vermont, United States) was a Jewish American historian and Holocaust researcher. His workThe Destruction of the European Jews, published in the United States in 1961, is one of the most important studies of the Holocaust.

As new information appeared, Hilberg continued to expand his work. Two more volumes appeared in 1985 and 2004, and the book was translated into over a dozen languages. Work on the Polish edition began in 2007, after initial consultations with the author. The author did not agree to the publication of an abridged edition in Polish because he believed that this particular book should come out in full in the lands where the Germans conducted the Holocaust.