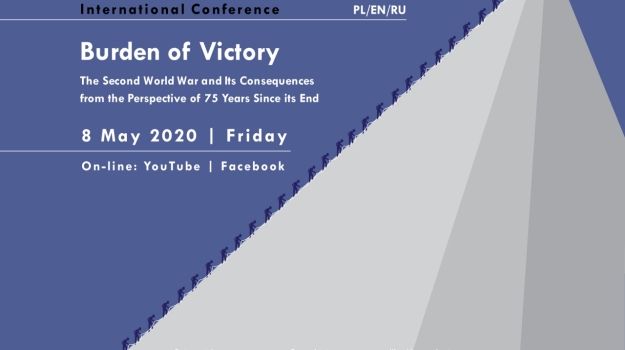 The international online conference "Burden of Victory: The Second World War and its consequences from the perspective of 75 years since its end"

Do Western European nations remember the war the same way East-Central Europeans do? Who shapes the imagery related to WWII events: historians or mass culture creative artists? Answers to these and other questions will be sought already this coming Friday 8 May by the participants of the conference titled Burden of Victory: The Second World War and its consequences from the perspective of 75 years since its end.

Because of the current epidemiological state the debate is going to have the form of a videoconference. Internet users will be able to follow it on the FB profile and YouTube channel of the Polish History Museum. It will be possible for the logged-in debate followers to put questions to the experts and the contributions will be interpreted into English and Russian.

The conference is going to consist of three discussion panels. The first one will focus on the memory of the Second World War: upholding it, forgetting about the war and, last but not least, using it for political reasons. During the second panel, the invited guests will focus on legal issues resulting from the Second World War, such as qualifying individual crimes as genocide, mutual border recognition or justifiability of war damages. In the third panel, researchers will discuss to what an extent the arrival of the Red Army marked a liberation or a new occupation of East-Central Europe as well as what was the impact of the fall of communism on studies concerning the Second World War.

After the online broadcast, the entire conference will be available for viewing on the websites and social media profiles of each of the organisers.

On 8 May, those interested will also have an opportunity to watch a 50-minute-long footage on TVP Historia featuring the discussion of some conference participants enriched with film material. The televised debate is going to be hosted by director of the Polish History Museum Robert Kostro and director of TVP Historia Piotr Legutko.

The conference enjoys honorary patronage of the Deputy Prime Minister and Minister of Culture and National Heritage Prof. Piotr Gliński.

The event will be broadcast of the FB profile of the Polish History Museum and its You Tube channel – MuzHPtv.

The broadcast will be also available on the FB profiles of the other co-organisers of the conference.

Cooperation: Centre for Polish-Russian Dialogue and Understanding, European Network Remembrance and Solidarity and Museum of the Second World War

Co-financed by the Ministry of Culture and National Heritage.

The following participants have confirmed their conference attendance:

Dr Łukasz Adamski, a historian and political scientist specialising in the history of Eastern European countries as well as analysis of their current political situation. Since 2016, deputy director of the Centre for Polish-Russian Dialogue and Understanding. In 2006–2011, an analyst and then a coordinator of a programme on bilateral relations in Europe at the Polish Institute of International Affairs. In 2014, rapporteur of an OSCE Special Monitoring Mission in Ukraine;

Dr Łukasz Kamiński, a historian specialising in most recent history of Poland and East-Central Europe. In 2000–2016, he worked at the Institute of National Remembrance, including as its chairman since 2011. Author of numerous publications on communism and opposition in communist countries. Currently, he is a lecturer at the University of Wrocław. Since 2017, he has been head of the Platform of European Memory and Conscience – an organisation active, inter alia, in disseminating knowledge on 20th-century totalitarian regimes;

Prof. Georgiy Kasianov, director of the Chair of Contemporary History and Politics at the History Institute of the Ukrainian National Academy of Sciences. Author, co-author, editor and co-editor of more than 20 books on Ukrainian history in the 19th, 20th and 21st centuries.  He specialises in the history of intelligentsia, the history of ideas and memory studies. His most recent publication is Past continuous: ìstorična polìtika 1980-h - 2000-h.: Ukraïna ta susìdi (2018);

Prof. Stephan Lehnstaedt received his PhD from Ludwig Maximilian University of Munich (LMU) in 2008 and his habilitation (in contemporary and newest history) from the Technical University of Chemnitz in 2016. In April 2016, he joined Touro College Berlin as Professor for Holocaust Studies and Jewish Studies. His main fields of interest are the history of the two World Wars, the Holocaust and compensation for it in the 21st century (ghetto labour pensions). Most recently, he has published a book comparing the imperialism of Germany and Austria-Hungary in the First World War with that of the Nazis in the Second World War, both exemplified by occupied Poland.

Prof. Alvydas Nikžentaitis, a Lithuanian historian, academic lecturer and director of the Lithuanian Institute of History. In 1992, he founded the Centre for West Lithuanian and Prussian History at Klaipėda University together with Vladas Žulkus – and became its director. From 1993 to 1998, he headed the Faculty of History of Klaipėda University and subsequently collaborated academically with the Centre for West Lithuanian and Prussian History for two years. He specialises in relations between the Grand Duchy of Lithuania and the Teutonic Order, the history of Samogitia, the history of Lithuanian-German relations and the social history of medieval Lithuania. For the past ten years, he has been focusing his research on memory culture. He is the author of numerous works dedicated to the history of Lithuania. Chairman of the Polish-Lithuanian Jerzy Giedroyć Forum for Dialogue and Cooperation and a member of the Board of the Polish History Museum.

Prof. Andrzej Nowak, a historian, feature writer, Sovietologist and a lecturer at the Jagiellonian University. He heads the Section for the History of Eastern Europe and the Empires of the 19th and 20th Centuries at the Institute of History of the Polish Academy of Sciences. He deals mainly with the political history and thought of Eastern Europe of the 19th and 20th centuries and is an expert on Polish-Russian relations. Author of the multi-volume series titled Dzieje Polski [The History of Poland]. Member of the Board of the Polish History Museum and the College of the Institute of National Remembrance. A knight of the Order of the White Eagle.

Prof. Jan Rydel, a historian and his research areas are Central and Eastern Europe and Polish-German relations in the 19th and 20th centuries. He is the author of Politics of History in Federal Republic of Germany. Legacy – Ideas – Practice (2011) and Polish Occupation of North Western Germany. 1945–1948. An Unknown Chapter in Polish-German Relations (2000, German edition 2003). Until 2010, he was a researcher and a professor at Jagiellonian University and is currently a professor at the Pedagogical University of Cracow. Between 2001 and 2005, he headed the Office of Culture, Science and Information at the Polish Embassy in Berlin. Since 2008, he has been Poland’s representative on the board of the Polish-German Foundation for Sciences. He is a voluntary custodian of the Rydlówka Manor Museum of Young Poland in Kraków. Prof. Rydel is a member of the ENRS Steering Committee and coordinates the Polish party in the European Network Remembrance and Solidarity.

Mark Solonin, an independent Russian historian. In his research, he focuses on the first weeks of the Great Patriotic War, looking for the answer to the question why Stalin’s empire after years of preparing for the Great War suffered such a devastating defeat in the summer of 1941. He is inclined to believe that the USSR had been preparing for an offensive war. Author of seven books published in Poland, Germany, Czechia, Estonia, Lithuania and Bulgaria.

Dr Oldřich Tůma, a senior research fellow at the Institute of Contemporary History of the Czech Academy of Sciences, Prague, formerly (1998-2017) director of the Institute. His original research focus was medieval and Byzantine history. Since the early 1990s, his research has focused on the modern history of Czechoslovakia and Central Europe, and the history of the Cold War. Dr Tůma is an observer member of the ENRS Academic Council.

Jonathan Walker, a historian of the military and a lecturer in the history of 20th-century wars. He studies not just war strategy and tactic but also the fate of men and women engaged in wartime action. A member of the British Commission for Military History and a Honorary Research Fellow in War Studies at the University of Birmingham. Author of, inter alia, Aden Insurgency, The Blood Tub and War Letters to a Wife (editor) His most recent book titled Operation Unthinkable (2013) is a study of Churchill’s top secret plan concerning an attack on the Soviet Union in 1945. Jonathan Walker is known to Polish readers thanks to his book Poland Alone. Britain, SOE and the Collapse of the Polish Resistance, 1944 (2010).

Dr Sławomir Dębski, a historian and political scientist in international affairs. Since 2016, and earlier in the period 2007–2010, director the Polish Institute of International Affairs. Author of books, articles and collections of diplomatic history sources. Interests: Polish foreign policy, the EU’s external policy, NATO, Russian foreign and internal policy and German-Russian relations. In 2011–2016, director of the Centre for Polish-Russian Dialogue and Understanding.

Robert Kostro, a historian, feature writer and Director of the Polish History Museum in Warsaw (since 2006). Graduate of the Faculty of History at the University of Warsaw. Former director of the Foreign Affairs Department at the Chancellery of the President of the Cabinet of Ministers and director of the cabinet of the Minister of Culture and National Heritage. Co-creator and programme director of the Adam Mickiewicz Institute. Member serving on many bodies, such as the Scientific Board of the Ossoliński National Institute or the Historical Programme College of the European Solidarity Centre. Co-author of books, e.g. Świat polityki, dyplomacji, idei – słownik podręczny (with Rafał Matyja) and Pamięć i odpowiedzialność (with Tomasz Merta). Author of numerous press articles published, inter alia, in Rzeczpospolita, Tygodnik Powszechny and Więź.

Rafał Rogulski studied cultural and political science at the Universities of Wrocław and Marburg, and participated in the Executive MBA programme at the Polish Academy of Sciences in Warsaw. He was an assistant and then an advisor to Professor Władysław Bartoszewski, first at the Polish Robert Schuman Foundation and the Ministry of Foreign Affairs (1998–2001), and later at the Chancellery of the Prime Minister of Poland (2008–12). From 2001 to 2005 he was secretary of the Culture Department at the Polish Embassy in Berlin. In the late 1990s Rogulski worked as a journalist for the daily Życie (Life) and the bimonthly journal Europa. In 2010, Ministers Tomasz Merta and Andrzej Przewoźnik entrusted him with the creation and management of the ENRS Secretariat, which in 2015 became the Institute of European Network Remembrance and Solidarity.

Polish History Museum is a state cultural institution whose seat is being built at the Warsaw Citadel. Its permanent exhibition now in preparation is going to focus on the key motifs of Polish history – that of the state and the nation – with particular attention to the notion of freedom: parliamentary traditions, civic institutions and movements, as well as fighting for freedom and independence. More at: muzhp.pl.

Centre for Polish-Russian Dialogue and Understanding is a Polish public institution statutorily set up by the Polish Sejm and acting for better understanding between the Poles and Russians. It carries out, inter alia, research, publishing, education and dissemination activities. More at: cprdip.pl.

European Network Remembrance and Solidarity is an international initiative which focuses on researching, documenting and disseminating knowledge about Europe’s 20th-century history and ways it is commemorated with a special focus on periods of dictatorships, wars and public opposition against captivity. The Network’s members are Germany, Hungary, Poland, Romania and Slovakia while Albania, Austria, Czechia and Georgia have the observer status. More at: enrs.eu.

Museum of the Second World War is a state cultural institution with its seat in Gdańsk, disseminating knowledge about the Second World War as well as cultivating memory of its victims and heroes. The Museum carries out exhibition, educational and research activities in the form of its permanent exhibition, temporary ones, educational and publishing activities, as well as R&D and other works. More at: muzeum1939.pl.