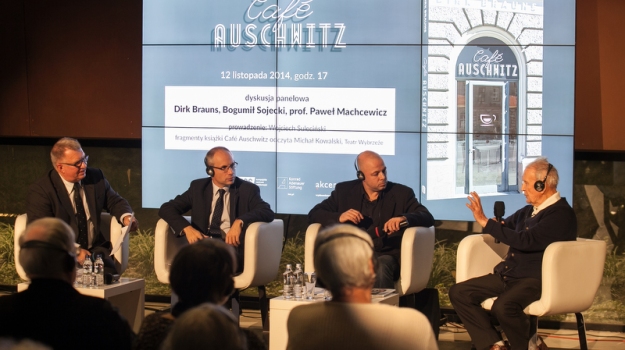 Taking part in the discussion were: Dirk Brauns, the author, Prof. Paweł Machcewicz, historian and Director of the Museum of the Second World War and Bogumił Sojecki, a former prisoner of Stutthof and Auschwitz-Birkenau concentration camps. The discussion was moderated by Wojciech Suleciński.

The novel written by the German author contributed to a debate on the image of Auschwitz concentration camp in the memories of eyewitnesses, on a critical review of injustice but also on the painful past and Poland today.

The novel, is set in present-day Poland and Germany. A young teacher, born in the German Democratic Republic, who works in a German school in Warsaw (a spokesman for the author) meets by chance Janusz, a former prisoner of Auschwitz-Birkenau, and becomes a witness to his memories and the executor of his surprising last will. Their meeting in the café is a point of departure for a sequence of events abounding in unexpected twists.

Dirk Brauns (born in 1968) who lives in Munich was brought up in East Berlin. For many years, he has been working in Beijing and Warsaw as a foreign correspondent for many newspapers and periodicals such as Die Woche,Berliner Zeitung and Wirtschaftswoche. Other novels by Dirk Brauns are: Berlin – München. Zu Fuss (From Berlin to Munich. On Foot) published in 1997 and Im Inneren des Landes (In the country) published in 2012.