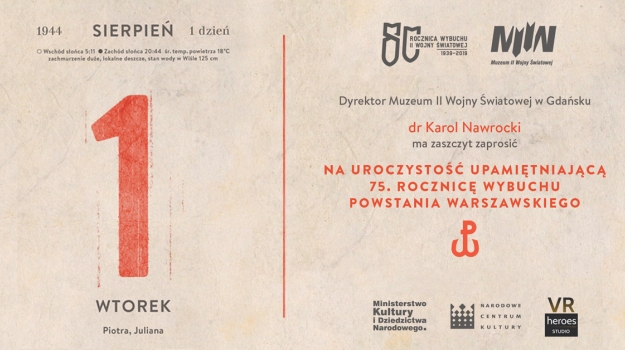 Anniversary of the outbreak of the Warsaw Uprising (1ST August - Thursday)

On the Anniversary of the outbreak of the Warsaw Uprising (1ST August - Thursday) we wish to pay homage to all the Heros who fought in Warsaw against German occupants.

Director of the Museum of the Second World War in Gdansk, Karol Nawrocki, is honoured to invite you to the 75th Warsaw Uprising Anniversary ceremony.

17:10 Message for the Insurgent – the official launch of New Technologies Zone and the premiere of the first VR-based Polish film.
Two years in the making and sixteen minutes long, the film is based on the experiences of Cpt. Władysław Sieroszewski, one of the Warsaw Uprising fighters,  who joined the Uprising in August 1944. At that time he was given a small piece of paper with a prayer from his daughter. He could not have known back then how this gift would change his life.

The Dream (Sen) theatre play is a culmination of  a six-month long educational project, Changing the Perspective. Edition II,  aimed at teenagers. The play has been prepared by a workshop group under the direction of culture animator, Magdalena Gajewska. The play’s script is partly based on memories of Prof. Jerzy Grzywacz, a member of the Home Army and the Warsaw Uprising soldier.

The play, dedicated to audiences over twelve years of age, tells the story of young people and scouts’ participation in conspiracy and resistance movement against German occupants during WWII. When enthusiastic, passionate, young spirits clash against the brutality of war, there is no place for being passive. The need for freedom appears to be stronger than terror, fear, or evasion. Deep solidarity turns into unpreceded-scale  resistance on the part of young people. Ordinary teenagers, facing extraordinary circumstances, prove their heroism and maturity. The play is also an homage to the past and should incite feelings of gratitude for present day freedom we all enjoy.