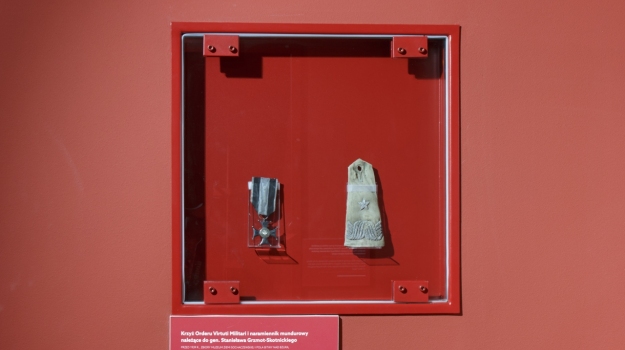 #stayhome and join our new social campaign #seeourtemporaryexhibit! Today we present to you the epaulette from the uniform jacket, a part of the field uniform belonging to Brig. Gen. Stanislaw Grzmot-Skotnicki, and his Virtuti Militari Cross.

In the entire 1939 Polish Campaign, the Battle of Bzura has special significance: as the largest armed clash of the Polish Army with a German aggressor and as the battle in which the Polish Army's carried out a large-scale offensive. The fighting went on from 9 to 22 September. Unfortunately, despite the initial successes, with Poles overpowered by the enemy, the battle ended in the defeat of the Polish army. The tragic outcome of the clash was exacerbated by the death of three Polish generals: Franciszek Wład, Mikołaj Bołtucia and Stanisław Grzmot-Skotnicki.

The last-mentioned General led a unit of soldiers on 18th September in an attempt to break out of the  German encirclement and reach Kampinos forest. After crossing the Bzura river, the General was severely wounded in a scuffle near Tułowice and, despite having his wounds treated by the German medics while in  captivity, he died in the early morning of September 19, 1939.

The temporary exhibition "Fighting and Suffering" presents two exceptional objects belonging to the General: The Virtuti Militari Cross and an epaulette from his uniform with the Brigadier General's distinctions. Those are original exhibits. It is also worth pointing out here that both the Cross and the epaulette are  "silent witnesses" to the General's heroic deeds during the battles of the Bzura River. He had them with him during his final  journey and his dramatic death as a German prisoner of war.