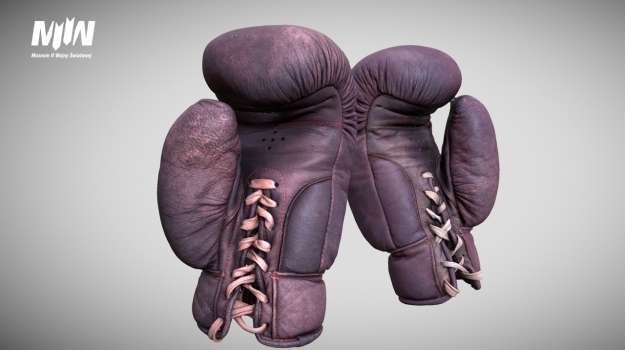 Jan Bianga – an excellent sportsman, one of the best boxers in the history of the Gdańsk sport scene – is the protagonist of another edition of our campaign “Entering History”. This time we present boxing gloves that belonged to the boxer and boxing coach of the legendary club Gedania. Most significantly, the next “Rocky Boxing Night” gala will be named after Jan Bianga.

So far, as part of the “Entering History” campaign, the exhibits have been presented at level -1 of the Museum of the Second World War in Gdańsk, at the main entrance to the building. While the Museum is closed to visitors, we decided to continue the series on the Internet, which is part of our #M2WSwirtualnie campaign.

It is worth noting that in a few days’ time, the figure of the boxer will be commemorated once again, because the next “Rocky Boxing Night” gala will be named after Jan Bianga. The event is scheduled for 11 December at Wielki Klincz, and it is going to take place under the patronage of the Museum of the Second World War in Gdańsk. Let us remind you that the previous gala called “Kaszubski Gryf Pomorski Rocky Boxing Night” was also organised under the patronage of our institution.

LEARN THE STORY OF JAN BIANGA

Jan Bianga was born on 26 January, 1910 in Sopot. He studied at the Polish Gymnasium [Gimnazjum Polskie] and the Polish Higher School of Commerce [Polska Wyższa Szkola Handlowa] in the Free City of Gdańsk. Thanks to his education, he obtained a position of accountant at the Commissioner General’s Office of the Republic of Poland, where he worked continuously until the outbreak of the war. He was actively involved in social and cultural activities, and above all in sports. At first he participated in gymnastics training with the “Sokół” Gymnastic Society in Sopot, and in 1926, at the age of 16, he got involved in boxing, first at the German club “Sportverein Schutzpolizei Danzig EV” from Wrzeszcz, and from 1929 at the “Gedania” club, where his greatest successes were achieved. Bianga’s boxing career was very impressive, out of a total of 197 fights, he won 176, tied 12 and only lost 9.

It is worth mentioning that those were hard times for Polish sport in Gdańsk. The Poles did not get access to the local sports infrastructure from the Gdańsk authorities and were forced to build their own training facilities from scratch, based largely upon the “Sokół” Gymnastic Society operating in Wrzeszcz since 1894. In 1922, the “Gedania” Sports Club was established - the largest Polish sports institution in the Free City of Gdańsk. At the beginning, the members of Gedania trained at the “Sokół” stadium in Wrzeszcz. In the following years, until 1939, the stadium was significantly expanded, mainly thanks to the financial assistance of the Polish Commissioner General’s Office of the RP. Members of Gedania organised numerous sports events and established contacts with other Polish and German clubs. Within the framework of Gedania there were several sections: football, shooting, athletics, motorcycling, boxing, tennis, ice hockey, men’s and women’s handball, table tennis and cycling. Gedania’s members achieved numerous successes in various disciplines (mainly football and boxing), often winning against German and Polish clubs outside of the Free City of Gdańsk [WMG].

On 1 September 1939, when World War II broke out, Bianga, like the rest of the staff of the Polish Commissioner General’s Office, was arrested by the Germans and deported to the German-Lithuanian border, from where he returned to Gdańsk by a roundabout route. After a short time, he was arrested again. Refusing to cooperate with the Germans, he was imprisoned in the Neufahrwasser camp and then transported to Stutthof, from where he was sent to the Sachsenhausen camp, and finally to Mauthausen-Gusen, where he was imprisoned until spring 1945.

After the war he returned to Pomerania and started working as a boxing coach. In 1955, he won the Polish vice-championship with his home club “Gedania”. In the years 1953-1955 and in 1961, he was also Felix Stamm’s assistant, coaching national team members.