Between the years 2006–2017, he worked at the Institute of National Remembrance - Commission for the Prosecution of Crimes against the Polish Nation in Bydgoszcz, in  branch offices, including the fields of public education, national education and commemorations of battles and martyrdom. As the head of the Bydgoszcz science and education team, he prepared exhibitions and exhibition catalogues, published and edited scientific works on the recent history of Poland, participated in scientific conferences and organized and implemented dozens of activities popularizing the history of Poland in the 20th century, particularly for schools, youth centres, teachers, veterans and local communities. He is also the author of several scripts for historical documentaries broadcast by the national television stations, TVP. On the initiative of Marek Szymaniak, from 2012 until mid-2017, approximately 50 meetings were held by the Bydgoszcz Historical Club under the direction of General Stefan Rowecki "Grot". Dr. Szymaniak is a member of the Club's Program Council. During that time, he prepared and gave his expert opinion on the content of several commemorations concerning World War II, combatants belonging to the Polish post-war independence underground and the anti-communist opposition. In 2014, he participated in a seminar for educators on the Holocaust at Yad Vashem in Jerusalem. In 2015, the director of the IPN Branch in Gdańsk appointed him to their Honorary Chapter along with their ‘Witness to History’ award. Since 2017, he has been a member of the advisory team of the Kuyavian-Pomeranian Region, taking part in the implementation of the Independence 2018 program.

As the chairman of the team for the evaluation of the core exhibitions of the Museum of the Second World War, he was responsible for the preparation of the content and implementation of the process of changes and additions to the main exhibitions in 2017–2018.

He is one of the originators of the Museum’s yearbook ‘War and Memory’, and since 2018 he has been acting as the publication’s thematic editor. He was also the author of the content of the commemoration dedicated to Prime Minister Jan Olszewski, which was unveiled at the Museum in 2019.

He is the co-author of the scenario for the temporary exhibition ‘Fighting and Suffering: Polish citizens during the Second World War’. In 2019, he coordinated the organization of the international scientific conference ‘War Pact. The collusion of Hitler and Stalin of the 23rd of August 1939, from the perspective of 80 years after the outbreak of World War II’, and in 2020 in the organization of the conference; ‘The  Fallen of Westerplatte. The graves and remains of the Westerplatian Defenders in the light of archaeological, genetic and historical research and in the context of legal procedures’. He co-edited the post-conference volume from the World Forum of Battlefield Museums. He is the author of many scientific and popular science texts in the field of history, as well as the co-originator and co-author of various popular science cycles published on social media on the subject of World War II.

Since 2018, he has been a member of the Programme Council of the Janusz Kurtyka Foundation.

- 2018: Medal of the 100th Anniversary of Regaining Independence awarded by the Prime Minister.

- 2016: Bronze Cross of Merit awarded by the President of the Republic of Poland Andrzej Duda "for merits in documenting and commemorating the truth about the recent history of Poland",

- 2015: Medal of the World Association of the Home Army Soldiers, Bydgoszcz District "for many years of cooperation with the local community of veteran soldiers",

- 2008: the award of the President of the Institute of National Remembrance Janusz Kurtyka "for exemplary performance of official duties", 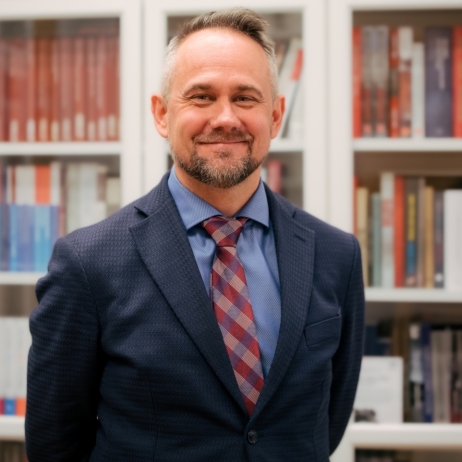